When in India do not forget to taste

A foodie’s paradise, India is filled with many opportunities to taste local delicacies and tantalise the taste buds. With so many dishes having been exported though, it’s sometimes difficult to distinguish between authentic dishes and watered-down versions. To help you navigate India’s epic food scene, we’ve put together this list of 10 traditional must-try foods to eat in India. And if you're a foodie at heart, discover the best destinations for authentic dining experiences. 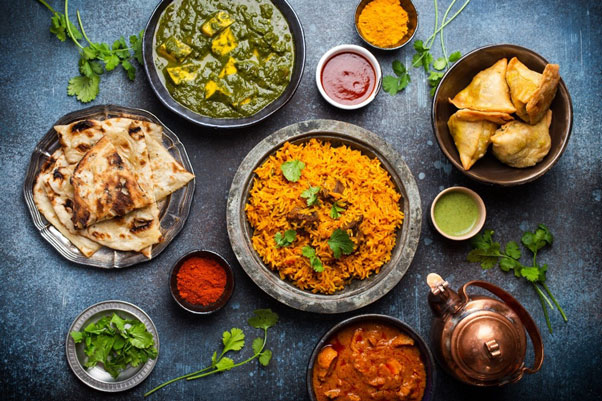 From parathas (stuffed flatbreads), puris (deep-fried bread), chaats (savoury snacks), gucchi pilaf (rice with morel mushrooms) to kebabs (cooked meat dishes), niharis (slow-cooked stew of mutton), daulat ki chaat (an avant garde version of milk skin), jalebi (deep-fried sweet pretzel) and the famous raan (a mutton-dish) , north India scores beautifully on vibrancy of cuisine. From the largest collection of parathas and differently-styled puris to kachoris (spicy snack), north India doesn't only have the biggest share of flatbreads in its kitty, but also an amazing array of dishes that are made with mutton, chicken and milk products. The northern part of India is popular for creating a whole class of cuisine based on a single type of ingredient. Anyone who has partook of the delectable Rajasthani food, which has been mostly developed on spices, would happily agree. Mixed with ker, lentils and grains, clever concoctions such as dal batti-churma, ker sangri (wildly grown cactus-like plant), laal maas (spicy mutton made with lots of red chilli), gatte ki sabzi (gravy-based dish) and mohanthal (rice and gram flour barfi), have been made. The northern sentinel of the country, Kashmir, also has a scrumptious menu to its credit. Ranging from haaq (a local spinach delicacy) to gustaba (meat balls), from tabak maaz (fried-lamb ribs) to khatta baigan (eggplant dish), the milieu of dishes leaves one wanting more. Travelling down to the hilly terrains of Himachal Pradesh, one can find sidku (yeast bread), chaa gosht (mutton curry) and a wide variety of fruit wines. The highlight of the cuisine here is the common use of chulah to cook and tandoor to bake. 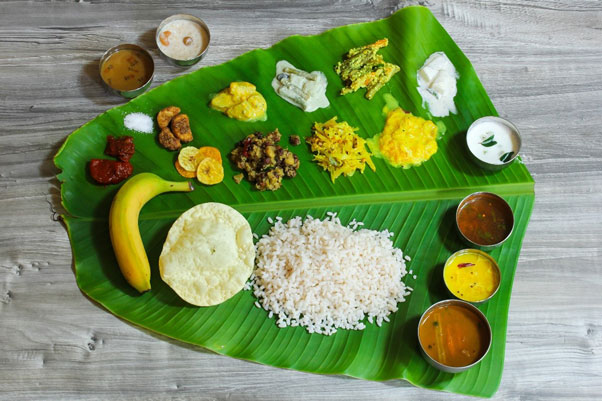 From idlis (steamed rice cakes) to dosa (crepe-like pancakes), sambar (spicy lentil stew) to rasam (world’s oldest consommé), food of South India is a culture that has developed on the principle of Ayurveda. One of many firsts, steaming as a culinary technique evolved here, and that is how the steamed idlis and pithas (rice cakes) were conceived. In addition, it was here that deep frying technique was mastered and the first fried chicken dish made. The adoption of the Jewish food culture and that of Mappila community also took place here for the first time in the country. Udupi cuisine also developed in this region, which boasts 60 per cent of the Indian vegetarian menu, organic coffee and the best of spices, especially pepper, clove and cardamom. In fact, much of the food that is served here today can be dated back to before 2 century BC. Many believe that the technique of preparation has hardly changed. The Sadya, a ceremonial formal feast, is one such example, which consists of about 28 dishes, including boiled red rice, pickles, sweets, savouries and side dishes. It is served on a plantain leaf and traditionally, the tapering end of the leaf faces the guest. 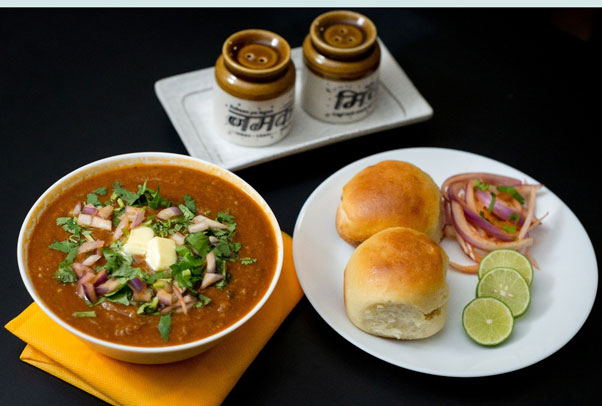 The food culture of western India, essentially Gujarat, Maharashtra and Goa, was initially developed by tribes (predominantly fishermen and brahmins). As the region progressed, the food culture drew influences from the merchant and trading communities, who lived here. An excellent example of this has been Parsi delicacies like dhansaak (meat curry with lentils and vegetables), altee paletee (a dish made with eggs and keema, usually had for breakfast) and akhuni, which were inspired from traditional Gujrati, Kokani and colonial cuisines. Even today, the food culture in this region has three distinct layers – the vibrant Kokani food that was developed by early dwellers; the Maharashtrian cuisine that was developed by the brahmins and sahukars and defined under the Maratha rule; the Parsi Anglo-Indian food that came during the colonial times. The fare in Gujarat is predominantly vegetarian, with a hint of sweetness intermingled with dal (lentils), kadhi (gravy-based dish of chickpea flour) and sabzi (dish made from a combination of cooked vegetables), which are commonly found there. A generous use of brown sugar is preferred in most dishes and staples include khichdi (dish of rice and lentils), chaas (buttermilk) and homemade pickles. Meanwhile, food in Goa in inspired from its Portuguese colonialism and Hindu origins. Being on a coastal location, food is heavily dependent on the sea, with rice and fish being the most common meal. Some of the delicacies worth trying here include kingfish, pomfret, tuna and mackerel. The Hindu cuisine of the area is very light on spices and uses little to no onion and garlic in its recipes. However, one can find a liberal use of lentils, gourds, pumpkins, roots and bamboo shoots. The topographical variety of the state of Maharashtra guarantees further diversity in its cuisine, which can be broadly classified into two parts. The coastal areas of the state call rice, fish and coconut their staple food, while the hilly terrains of the Western Ghats, have an abundance of groundnuts, jowar (sorghum) and millet. 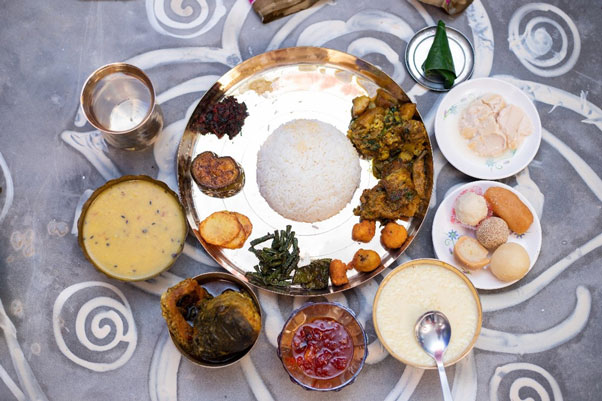 Food in the eastern part of India is believed to be one of the oldest cuisines in the country. The food ecosystem of this region, which primarily consists of the states of Bihar, Bengal, Odisha and parts of Andhra Pradesh, is an interesting mix of regional cuisine and international influences. Interestingly, the Indian version of Chinese food that is relished in every nook and corner of the country, was developed in the Tangra area of erstwhile Calcutta. The eastern part of India is known as much for its temple cuisine as for its coastal food. Its beauty lies in its concept of steaming, smoking, stir-frying and fermenting. In fact, if one ever wants to try versions of the famous British mashed potatoes, this is the part of the country they should visit. Aloo bhatey or aloo chokha, as it is called, is an omnipresent part of the cuisine here and is paired with almost every delicacy: be it pokhalo or panta bhaat (fermented and spiced rice), litti (sattu-filled hardened donuts) or even dal bhaat (rice with lentils). It is also the region that popularised pithas (pancakes made of rice batter) and chenna- (ricotta-cheese) based sweets like rosogolla. 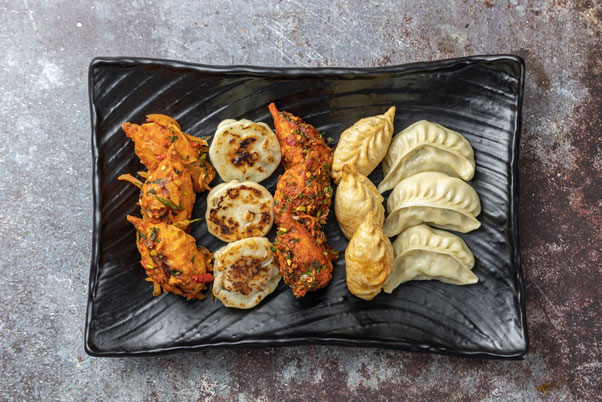 Comprising seven states, known as the Seven Sisters, along with the inclusion of Sikkim, Northeast India is known for its interesting tribal cuisine and beverage culture, which hasn’t changed much since the medieval period. In fact, the Northeast not only has some interesting variations of vegetarian dishes from Manipur, but also a wide array of meat-based dishes made of pigeon, wild boar and pig meat. This region is rich in fermented food and unlike the rest of India, the cuisine here uses fermented pickles and mixes like akhuni (dish made of fermented soyabean) to get its flavours. It is considered as one of the healthiest cuisines in the world.

Indian food is extremely influenced by the climate, culture, traditions and geography, which means that each state of India has a cuisine that tastes different. Although there are truckloads of many types of food that is mouth-watering to us all, we present to you some culinary delights where you’ll be able to explore India through your taste buds. 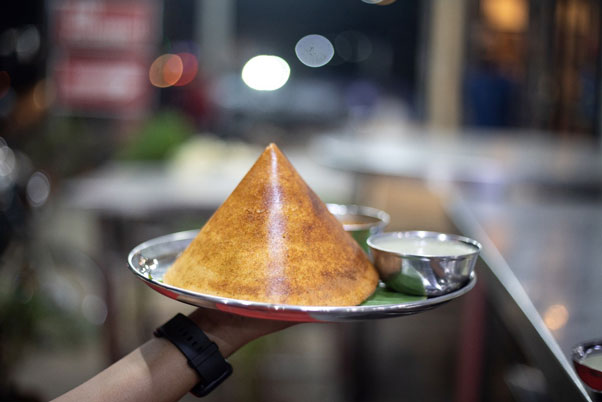 Arguably South India’s most renowned culinary export, masala dosas are famous the world over. A sort of Indian pancake, dosas are made from a thin batter consisting of rice, flour and lentils. Making dosas is no easy task, with the batter mixture having to soak in water for at least 24 hours before it can be shaped. Once ready, the batter is ladled onto a hot tava (griddle pan) and shaped in a similar way to how the French would shape a crepe. Traditionally, dosas are served folded in half and stuffed with potatoes. Accompaniments like hot sambar give the dish a spicy edge, and whatever you stuff them with, dosas are sure to provide a tasty yet satisfying meal. 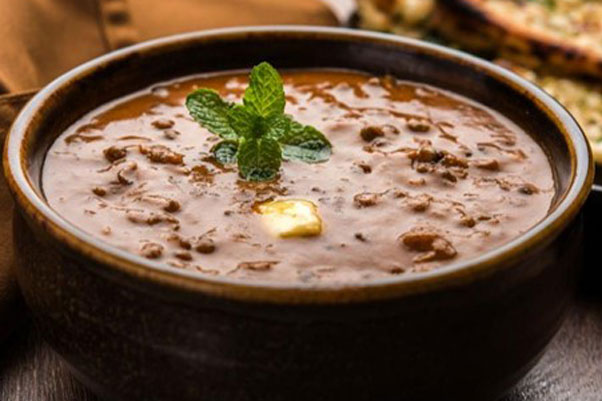 Most foodies will have heard of or tasted dal, but there’s nothing quite like tasting the original dish in the country where it originated from. Dal is the Hindi word for lentils, and this soup-like delicacy is made by stewing small black lentils for hours on end. Whilst there are many different varieties of this lentil dish, dal makhani is in a league of its own. It’s considered the best of the best, and is reserved for big events like wedding celebrations. With makhani meaning ‘buttery’ in Hindi, there’s no prizes for guessing how rich and creamy this Indian classic tastes. Head to Punjab, in India’s north, to taste the real deal. 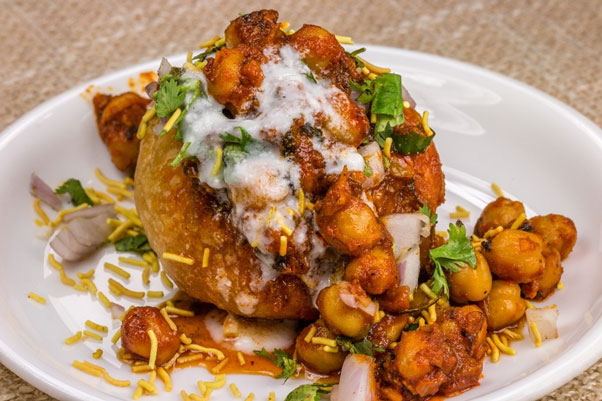 “Translated from Hindi, ‘chaat’ literally means ‘to lick, Street food is an essential part of Indian culture because the Indian love for food extends itself on to the street corners, by lanes and roads of small towns as well as big cities. Street food is tangy, spicy, sweet, crunchy and scrumptious. Street foods distinctly vary in every region of the country, they are predominantly local cuisines which are made spicier and tangier to satiate taste buds. Every city / state has their own version of Chaat / Street Food it is not heavy on the palate can be had anytime of the day. 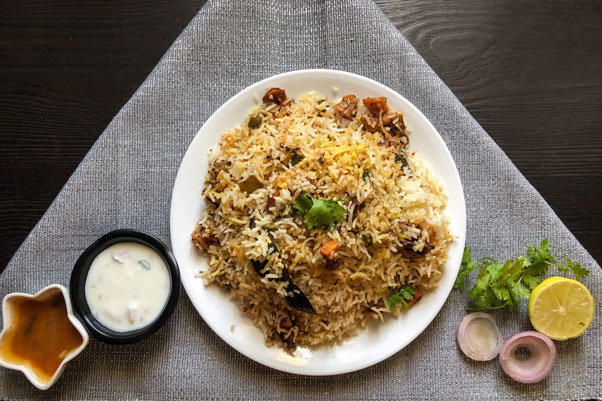 If there's one dish that enjoys a rampant fan-following across the country, it must be the biryani. Made with meticulously layered rice and meat, and aromatic spices (including more than a hint of saffron), this one-dish meal invariably starts a spicy banter among biryani lovers defending the biryanis of their areas: Thalassery biryani from south of the Vindhyas, Dindigul biryani from Tamil Nadu, Lucknowi biryani, Hyderabadi biryani and Kolkata biryani. The word biryani comes from the Persian words birian, which means ‘fried before cooking’, and birinj, meaning rice. There are various theories about the origin of this scrumptious dish. A biryani is not complete without red meat or chicken. It is the gelatin of the bones that coats every grain of rice while slow cooking, providing it a very unique texture and taste. 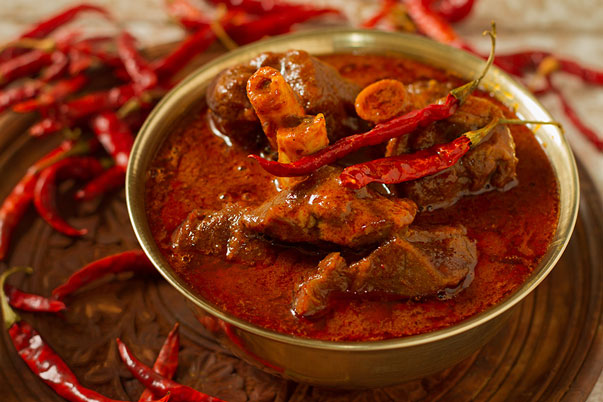 Rajasthani Laal Maans is a tasty meat curry from the Rajasthan, India. A favourite in royal kitchens, the maans or meat use to be the game meat, the dish was cooked after the hunt and a since very few masalas were carried along, and tomatoes and other vegetables are not native to this land of desert, the fresh game meat was cooked in dried red chilies and whole spices. Simmered for long hours while the flavors intermingled. The recipe uses red chilies but you can reduce the heat by substituting the Rajasthani fiery red chilies with the less hot Kashmiri red chili (remember to deseed) and reducing the quantity of red chilies used. The beautiful red colour of the curry is due to whole red chilies.. 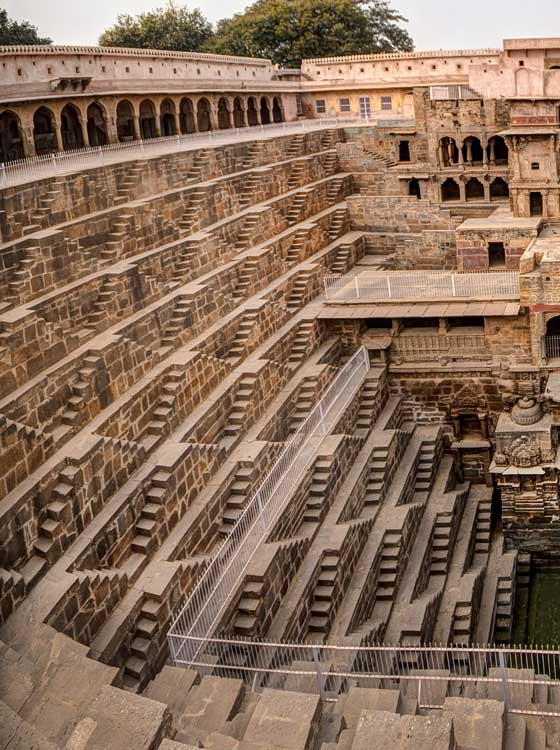 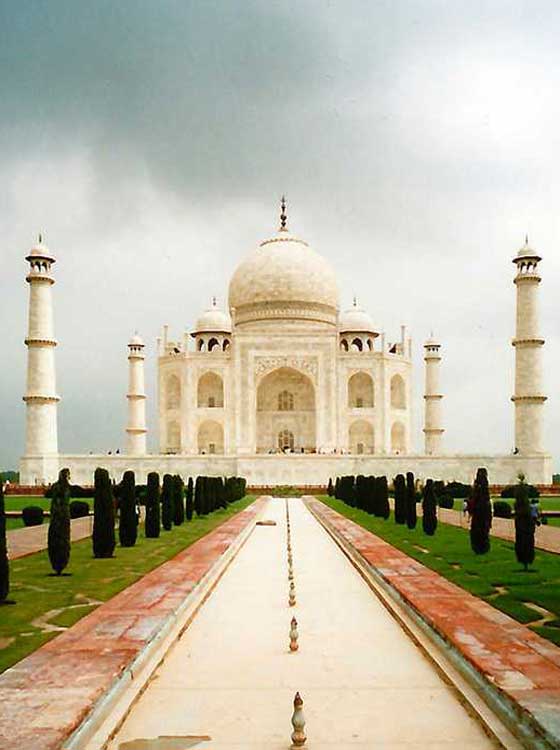